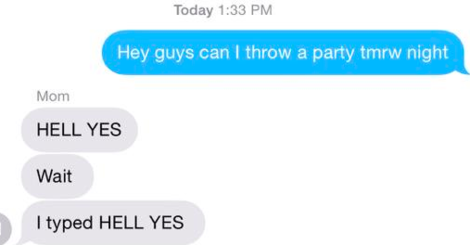 It’s probably safe to assume that Brendan didn’t actually throw the party he wanted, but for a few short moments, he got to bask in victory anyway.

Earlier this week, a guy who goes by the name nasshole on Reddit shared a screenshot of a text message interaction between him and his parents. He explained that he had adjusted the text shortcuts on his mom’s and dad’s phones so that whenever they typed “no,” something else would appear.

For his mom, “no” would turn into “HELL YES,” and his dad’s phone would transform the word into “WHERE MY BITCHES AT.”

Source: Kid Changes Shortcuts On Parents’ Phones So They Can’t Say ‘No’